The main objective of autonomous driving (AD) is safety: by eliminating the human factor, the accident rate can be reduced by up to 90%. Further advantages of this system are:

AD can be subdivided into several automation levels (SAE levels) or different use cases.

The SAE levels classify the amount of vehicle automation and autonomy and inversely the amount of responsibility of the human driver: from vehicles completely controlled by the driver (level 0) to auxiliary systems like ACC (usually level 1) and partial automation currently permitted in Germany (in particular ADAS functions like a lane assistant with radar-based speed control or supervised congestion/motorway pilots, level 2/3) to fully automated vehicles without even a steering wheel (level 5). 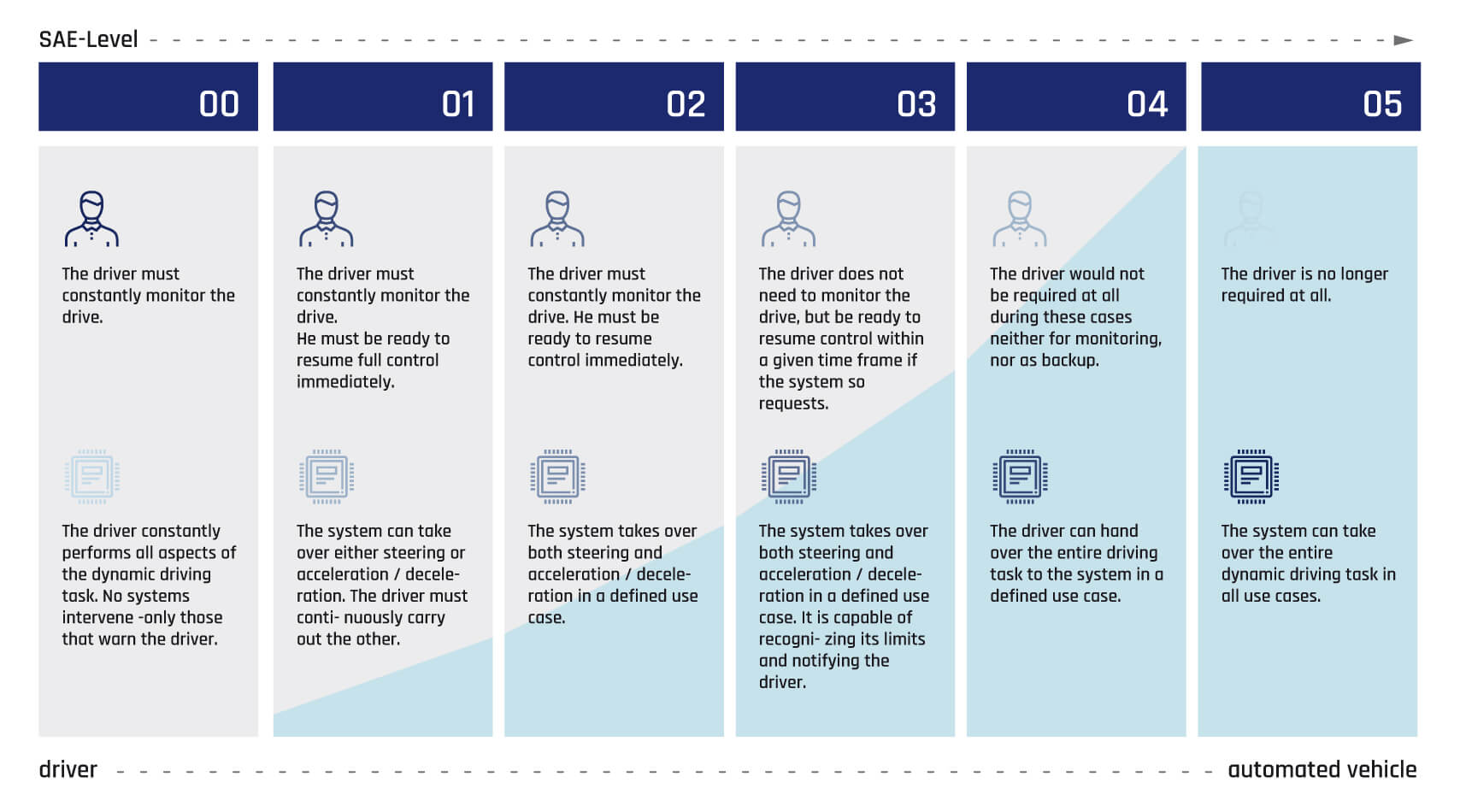 The use cases are indirectly dependent on the automation level (technical requirements) but also on the business model, the legal framework and the type of usage.

The vehicle-on-demand use case requires the highest level of automation. Here, the car manufacturers of today will largely become mobility service providers. Their business model will then no longer be based on selling vehicles but on providing a public car pool. Customers can use an app to call or book a car to the desired destination (similar to robot taxis or today’s car sharing) and select the type of vehicle and the type of service (e.g. single or shared use). This will significantly reduce travel expenses even down to cost-free options due to marketing models.

Today’s cars with the popular assistant systems constitute an interim stage on the way to AD. In the next step, the use case of valet parking within an area defined via geofencing will be implemented: the driver still drives the car downtown e.g. to go shopping, but after disembarking, the vehicle will autonomously go to special parking spaces outside the city center and return on demand. For safety reasons, this will happen in a restricted mode (e.g. at low speed). Automation of lorries on motorways is projected within the same time frame. In this case, the complexity of traffic is low and the speeds are physically and legally restricted. Similar regulated environments already exist in China in the form of exclusive lanes for autonomous mini busses and also in Germany (albeit based on different concepts).

Valet Parking - limited autonomous idle drive to the parking lot on the outskirts of the city after the occupants have left the vehicle.

Vehicle-on-Demand: on-call car from the autonomous fleet of a mobility service provider.

When there are only autonomous vehicles in the streets, the connection of a car with the infrastructure and other cars (V2X, also possible via 5G) will provide numerous advantages. However, the mixed traffic during the transition period with cars still driven by humans is a challenge for AD.

Other topics like occupant monitoring for a transfer of control, an aggressive attitude of humans against rule-based agents, undesirable possibilities for manipulation (robustness) and normative and brand-shaping individualization are also discussed in the context of AD. All these topics have to be considered in the internal control processes of the vehicle from detection of the outside world to the prediction of all participants’ movement and the determination of the car’s own position to the planning and control of the (short-term) trajectory.

The normative behavior of highly automated vehicles must not be underestimated. On a very basic level, this is already discussed in society and also in the media, partly by example of very drastic scenarios. The goal of all parties involved in development must thus be to provide maximum safety for autonomous driving and to completely guarantee transparency and the standardized legal requirements. These provisions are made in particular to counteract potential future conflicts, e.g. due to the (few) accidents that will still happen after series-production readiness of AD.

A significant challenge for AD on a societal level is the problem of acceptance: the normative system architecture with the respective values and characteristics – which still have to be worked out to a large extent by broad social discourse – are crucial for the success of AD technology. Even today, automation technology itself could often do more than is legally permitted. Many counterarguments, e.g. that humans will still prefer to drive for themselves because of the ‘fun’ involved, are already viewed as outdated. This is indicated both by the rapid adoption of assistance systems, some of which are already installed as standard today (adoption rate), and by findings from numerous pilot projects.

Generally, the responsibility of developers is highest when it comes to technologies that affect matters of life and death. This is indisputably the case with autonomous driving. Legal, social and ethical aspects must be taken into account. Some aspects required for the development of AD, such as the collection of necessary data (billions of [simulated] kilometers driven and high-resolution HD maps for localization), as well as the development of test fields and regulations, are already more advanced on other continents. In the development of normative technological hybrid architectures, on the other hand, we are striving to become pioneers.

What is autonomous driving? Where are we today? Where will we be tomorrow?

What is Artificial Intelligence?

What are embedded systems?

Limits of harm minimization calculations - in the case of unavoidable choice: endangering the cyclist with or without helmet?

Passive/indirect action in the case of a speeding truck and a pedestrian worth protecting (honking, counteracting)?

In particular normative behavior in the context of AD has many exciting aspects. We are looking forward to exchanging thoughts with you. Here you can find our contact form.