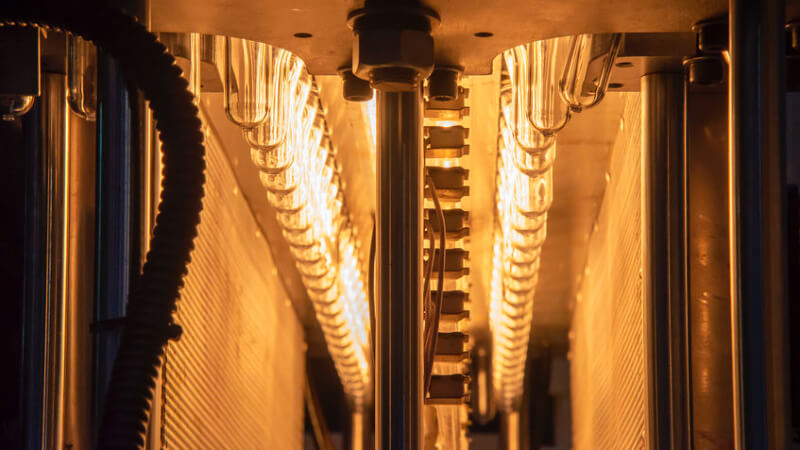 A Hamburg-based injection molding company with several production sites wanted to reposition itself to secure its market position. To do so, the company introduced a new production management software with ERP integration and master data accumulation. However, the commissioned automation service provider was not able to meet some of the critical challenges with ready-made solutions. This applied to specific steps of the process like the automatic sorting of parts after compression molding and the connection of an interim storage facility to the PPS system. Given the ever more trying job market, the company also required a further increase of efficiency and job security by technology impulses.

Our first process element was the development and joint plausibility check of the vision for the future. We wanted to attain a creative consensus with our customer through confrontation with disruptive possibilities. In this phase, we see ourselves as a catalyst while the customers decide over the orientation of their production processes and products. Our solutions have to reflect as many different customer interests as possible. One thing is for sure: each and every collaborator has a wealth of competencies, suggestions for improvements and constructive criticism to contribute, often in a context where you wouldn’t expect it at first.

After jointly concretizing the vision with all departments and the company management, the apparent and technically substantiated conceptual possibilities are concretized. Consequently, this enforces an early clarification of required functionalities and interfaces and of data acquisition (e.g. installation of microphones or video recording). This happens in close collaboration with the respective in-house departments and where appropriate in consultation with other service providers.

Part of our credo is that whenever we spot technological possibilities with our customers during the consulting stage and the topics are beyond our development focus, we clearly communicate this. In such cases, we gladly refer to suitable service providers. If required, we also establish contact. After all, nothing is more important for sustainable digitalization than thinking in overall systems without any limitations.

When the company management and the production management have decided on a conceptual strategy, the usual project process begins. In the prototype stage, the audio and video detection systems are trained and optimally positioned in their environment. This stage also includes the individual proof of concept of the elements of the final concept. The changes are intensively tested and adapted in test runs. The embedded system components developed by AITAD are then delivered and seamlessly integrated at the customer’s. A seamless integration with existing processes beyond the (series) development stageand delivery is of utmost importance.

For projects of this kind, compliance with health and safety regulations is essential. Elements like the connection of a new sorting process to machine interfaces or the PPS are carried out together with the manufacturer of the respective equipment.

A fast and efficient local camera solution was used for workpiece sorting. After providing additional illumination and a connection to the molding press for synchronization during the integration phase, this solution went into permanent operation. With the help of semantic picture segmentation, the workpieces are sorted in the selected production step within fractions of a second (> 10 x faster than manually).

To increase safety, keyword spotting systems were installed in critical production areas in addition to the existing standard systems and specifically trained with environmental noise present. By yelling ‘Emergency stop!’, you can immediately shut down a production step. This eliminates the need to cover the distance to the emergency stop button, which can often be of critical importance. Overall safety is thus increased above standard levels. Recognizing other keywords like e.g. ‘TS1 start!’ further improves machine collaboration and shortens processing times due to the elimination of required motions.

Due to the efficiency advantage of dynamic storage, a (NFC-based) RFID tag system with a suitable applicative backend was suggested for specific materials in the customer’s interim storage facility for consumables.

In certain production steps, the workpieces were equipped with active, autonomous tags for motion detection and environmental measurements (humidity, temperature etc.). Deviations in pass-through times and motion density, which may be caused by inexperienced manufacturing teams or by incorrect process temperatures, can thus be detected early on as imminent bottlenecks. This makes it possible to shift capacities in production dynamically (e.g. by a traffic light system to give an overview of the factory). These active, matchbox-sized modules are removable and reusable.

Another benefit arises from a systematic review of the process flow. The routing of forklifts and people (objects) can be optimized by anonymized ML object detection with temporary cameras to create spaghetti diagrams. This only happens temporarily and in parallel with or independent of the prototype stage of the permanent system components.

The systems are kept up to date for a long time by purposeful maintenance and updates.

The development of an internal app for the additional semiautomatic feedback on materials by the warehouse clerks matching the new RFID-based interim storage system was initiated together with a suitable service provider.

Due to their open interfaces, well thought out concepts like these present a good foundation for future projects. One example in the field of parts sorting is a possible CSV interface connection to the SAP PPS with extended master data accumulation with individual documentation.

Do you want to tap the innovative potential of your product digitally? Learn more about your possibilities and take part.